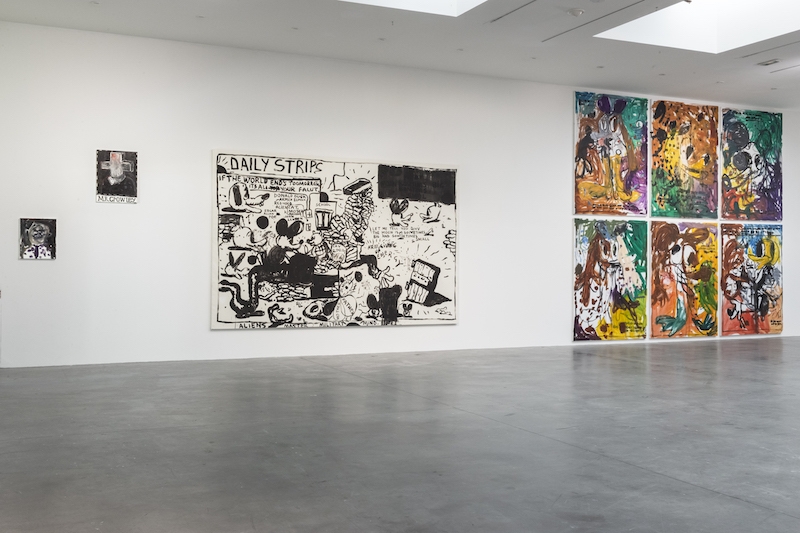 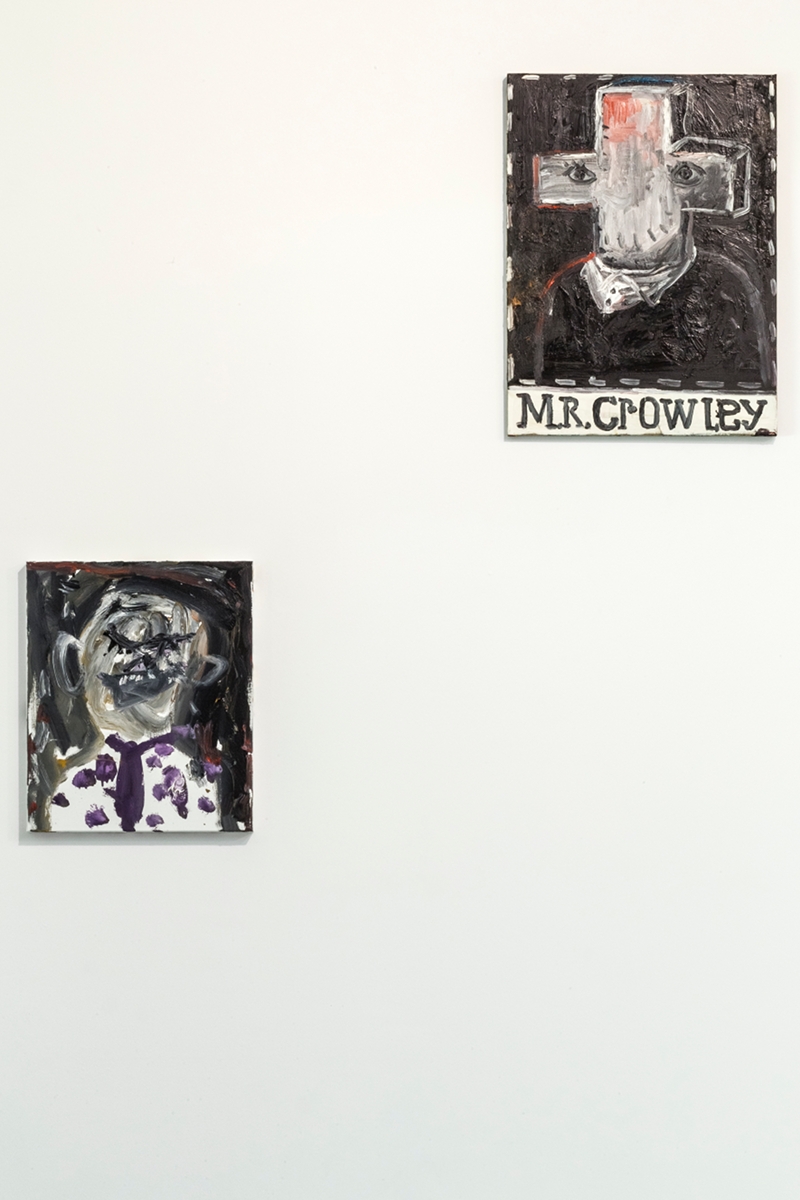 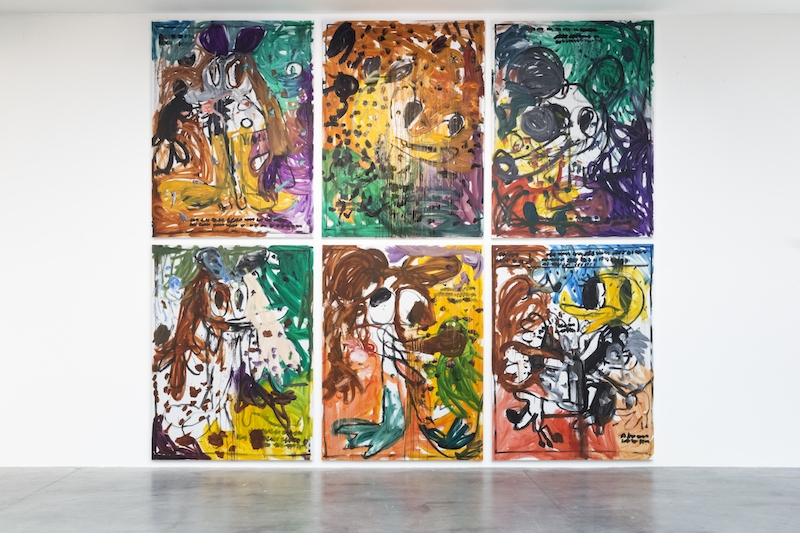 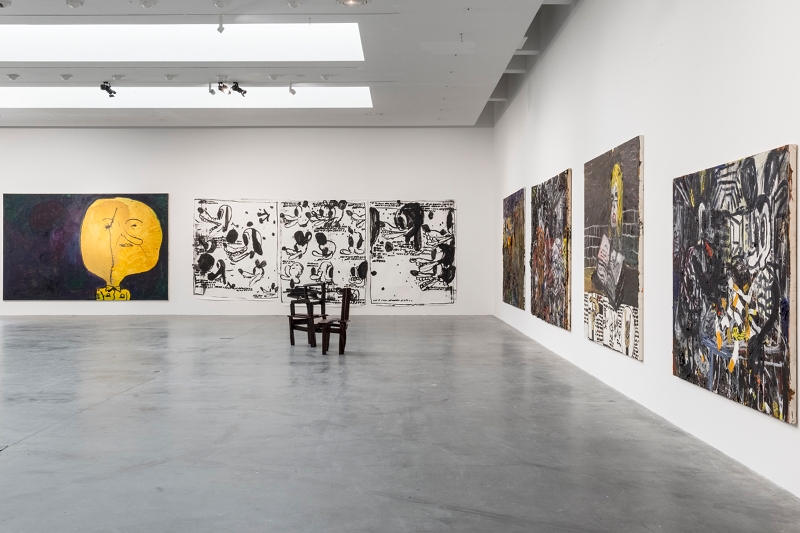 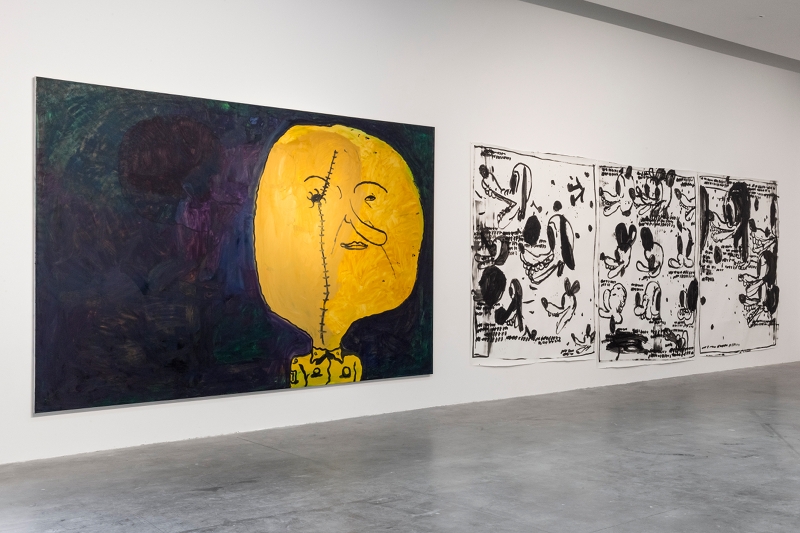 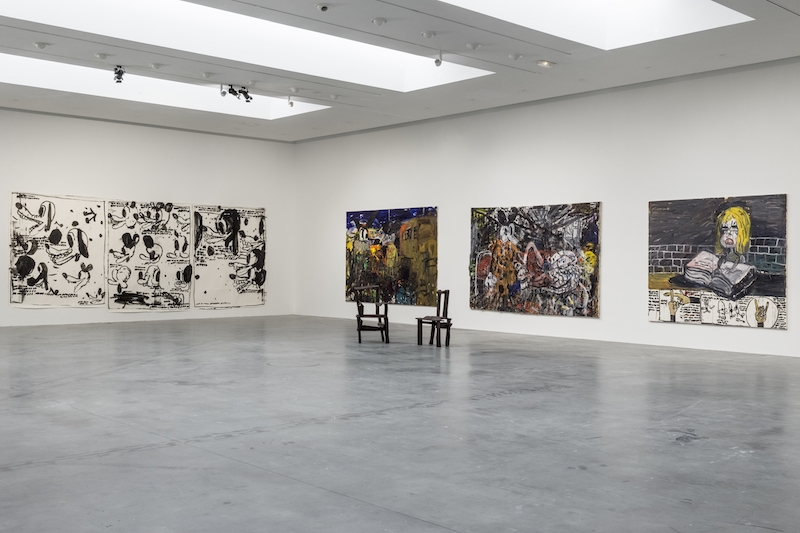 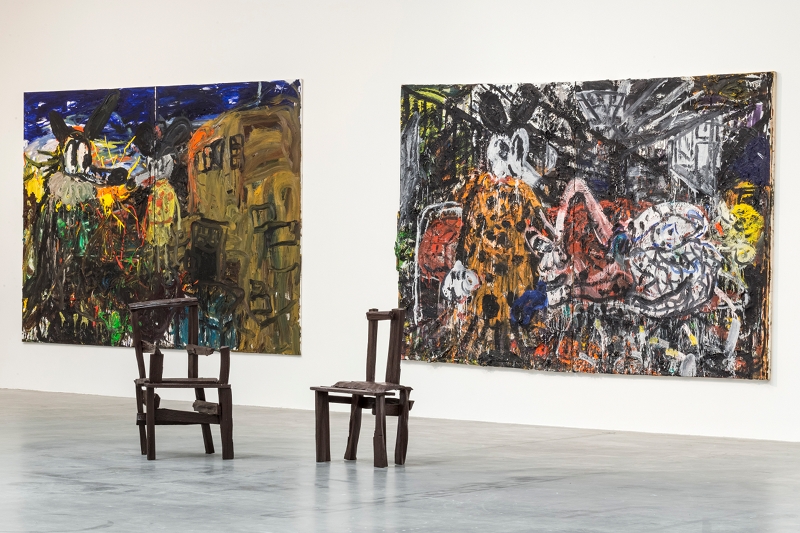 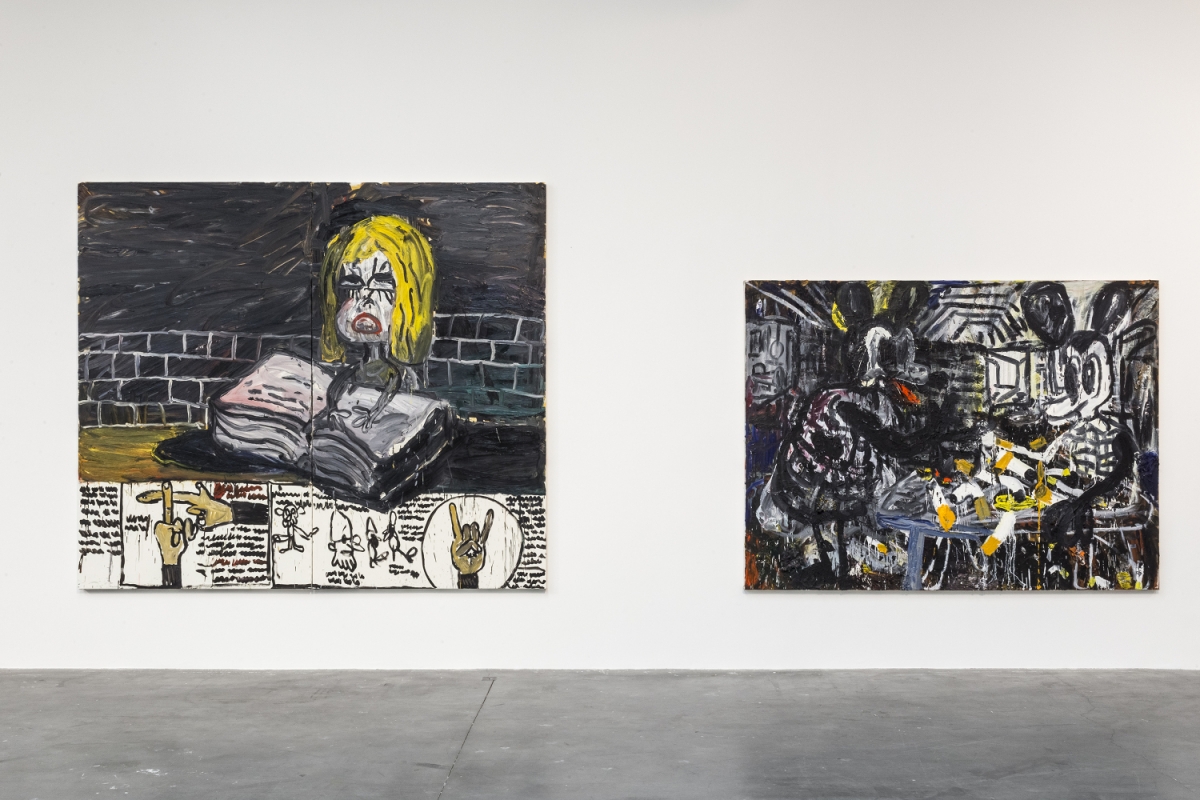 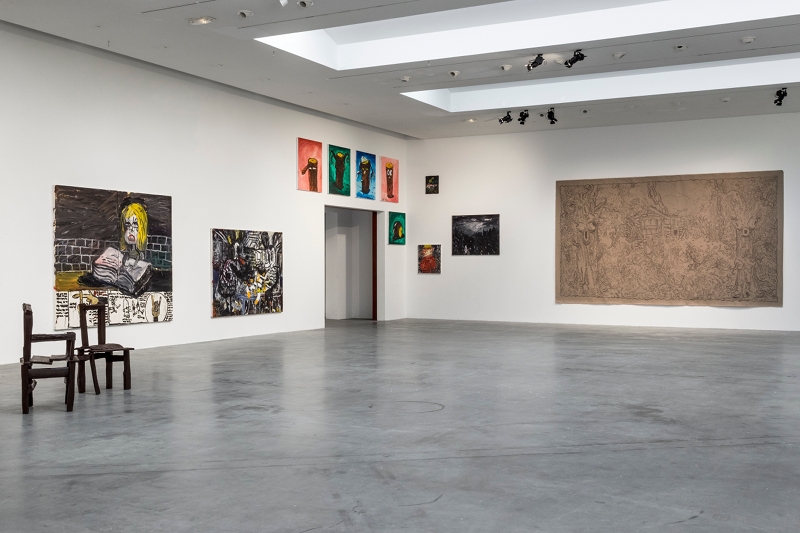 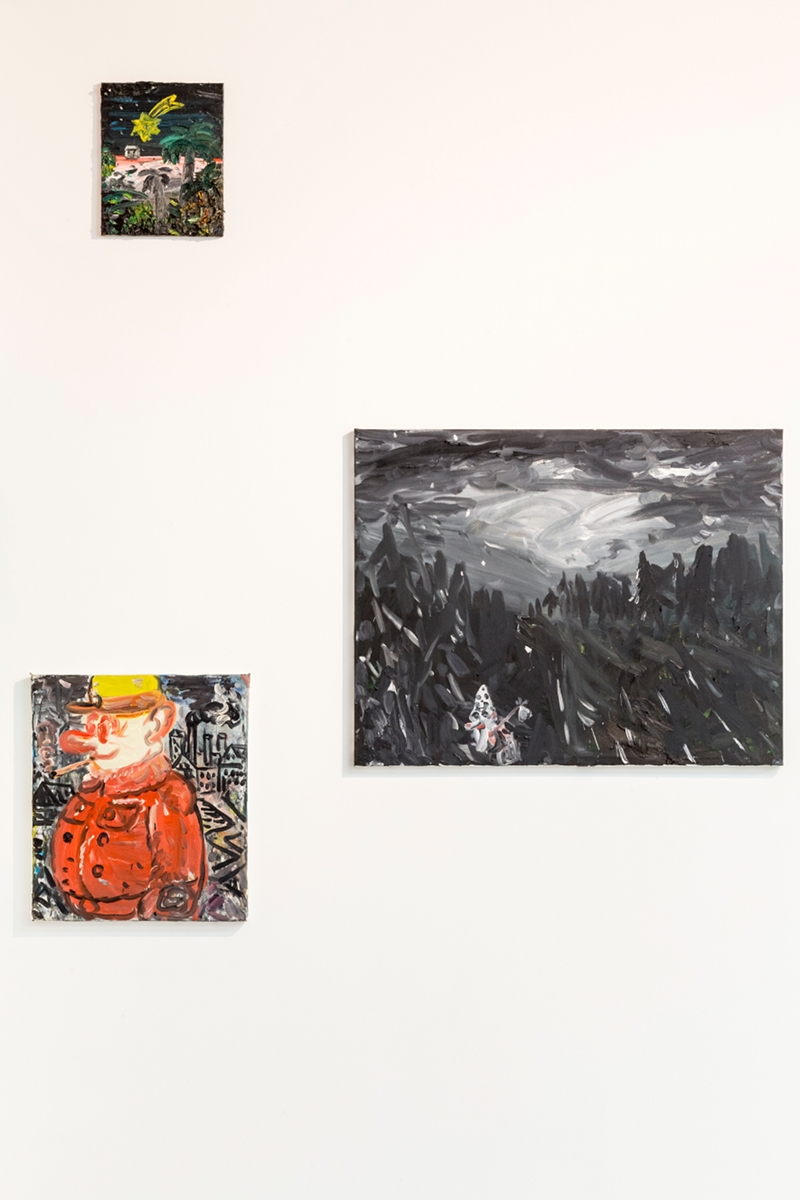 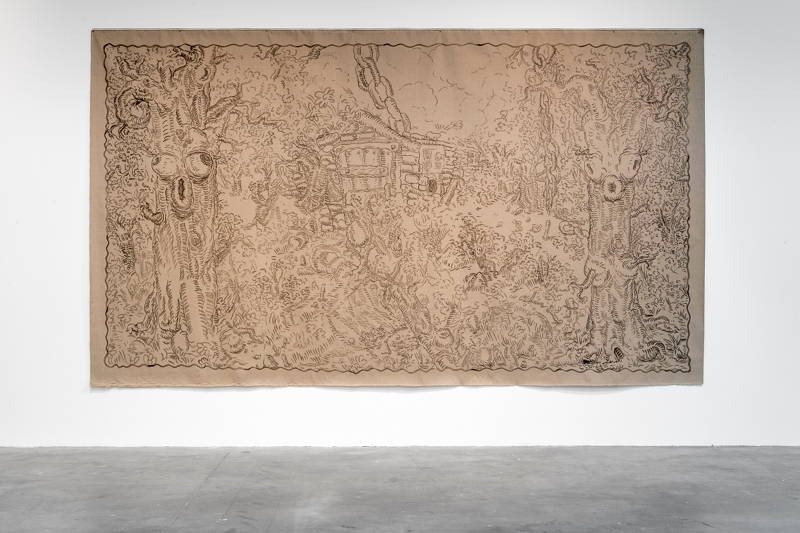 opening hours of the exhibition :

wednesday to sunday from 14h to 18h

The moon-headed man stands out against a midnight blue ground, in a medium close-up. a long scar splits the right side of his face shrouded in shadow, running like a rail track through the eye that has given way to a black hole. could it be from this gaping space that armen eloyan draws the ink blood that he spreads with such energy in his work, deeply charged with black moods and black humour? in imposing formats that fully involve his body, the artist depicts the hidden face of a ‘wonderful world’ that he dis-figures while at the same time forcefully revealing its true face, its dark, chaotic side.

Like ‘abstract versions of the original’, his paintings, drawings and sculptures revive and revisit familiar figures, taken from globalised popular culture and both individual and collective memory: mickey mouse, donald duck, Wile e. coyote and other cartoon and amination icons resurface as grotesque figures of dubious and disputable morals, projected in devilish scenes where (often masturbatory) sex and violence rule, and in which man’s perverse, animal side is sketched in innuendo, present in and among these anthropomorphic creatures. Human and non-human, tragedy and comedy, fairyland and dystopia meet and mingle, forming the spark of explosive, ambiguous, twisted, befuddled tales, that seem to engage in a secret dialogue with certain dark (and sometimes buried) episodes of History, riddled with fresh- ly-smarting scars and still open wounds. accentuated by the recurring motif of duality – whether in the combination of two paintings that make up a single whole or in the number of figures that are depicted there — the dramatic tension that armen eloyan generates and establishes goes hand in hand with the sparseness and garbled legibility of the text. drawing on the aesthetics of both street art and comic strips, the writing undergoes a doubly ‘performative’ movement, as if secretly running on batcave energy. it is a matter of making the image speak as much as of making the image via textual matter, according to a resolutely expressive but intentionally cryptic and interferential logic, deliberate in its non-communication.

The Frac des pays de la Loire regional collection of contemporary art plays host to a conversation between several pieces created over the last ten years, up until quite recently, which gives off the indefinable scent of melancholy and disillusion that imbues armen eloyan’s singular, ‘disturbed’ and disturbing work. in addition to the large- or extra-large-format (single or double) paintings, there is a series of sculptures whose volumes represent strange polymorphic and hybrid creatures in various materials (plaster, wood, cardboard, fabric, ink, paint, etc.). as if taken straight out of certain two-dimen- sional works, the dishevelled, gangling creatures, like disconcerting totem dolls, by their very presence heighten the phenomena of erection and embedding of a haunting obsession that inhabits and mirrors a world onto which no window opens, but all doors are closed. That’s all folks! 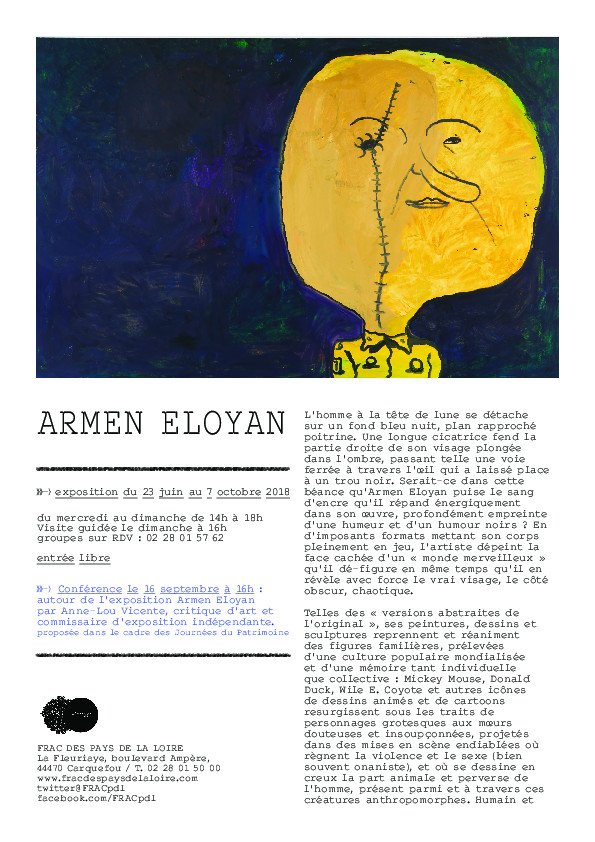 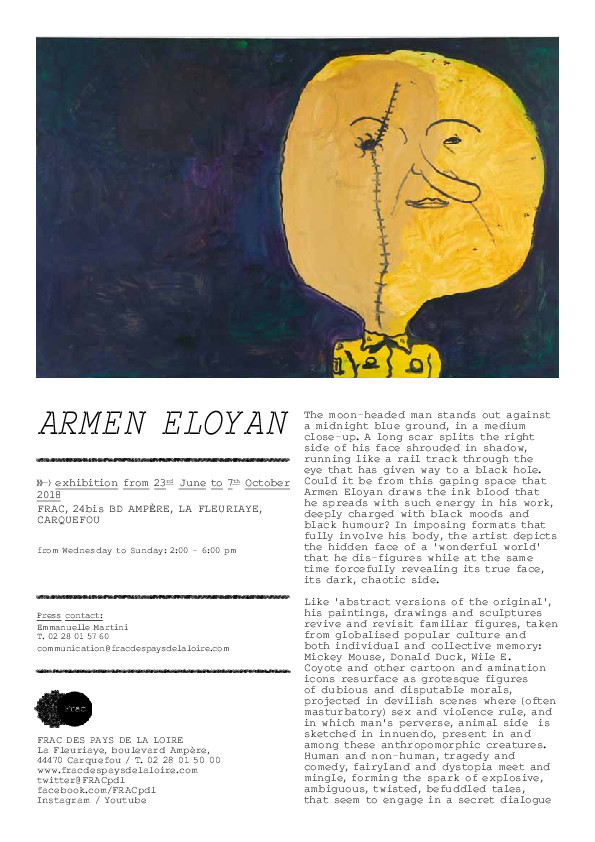 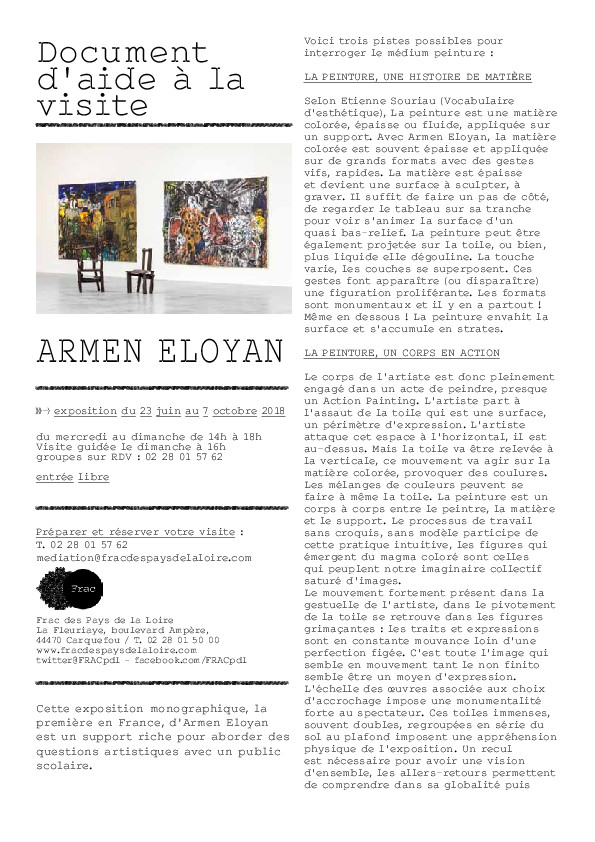